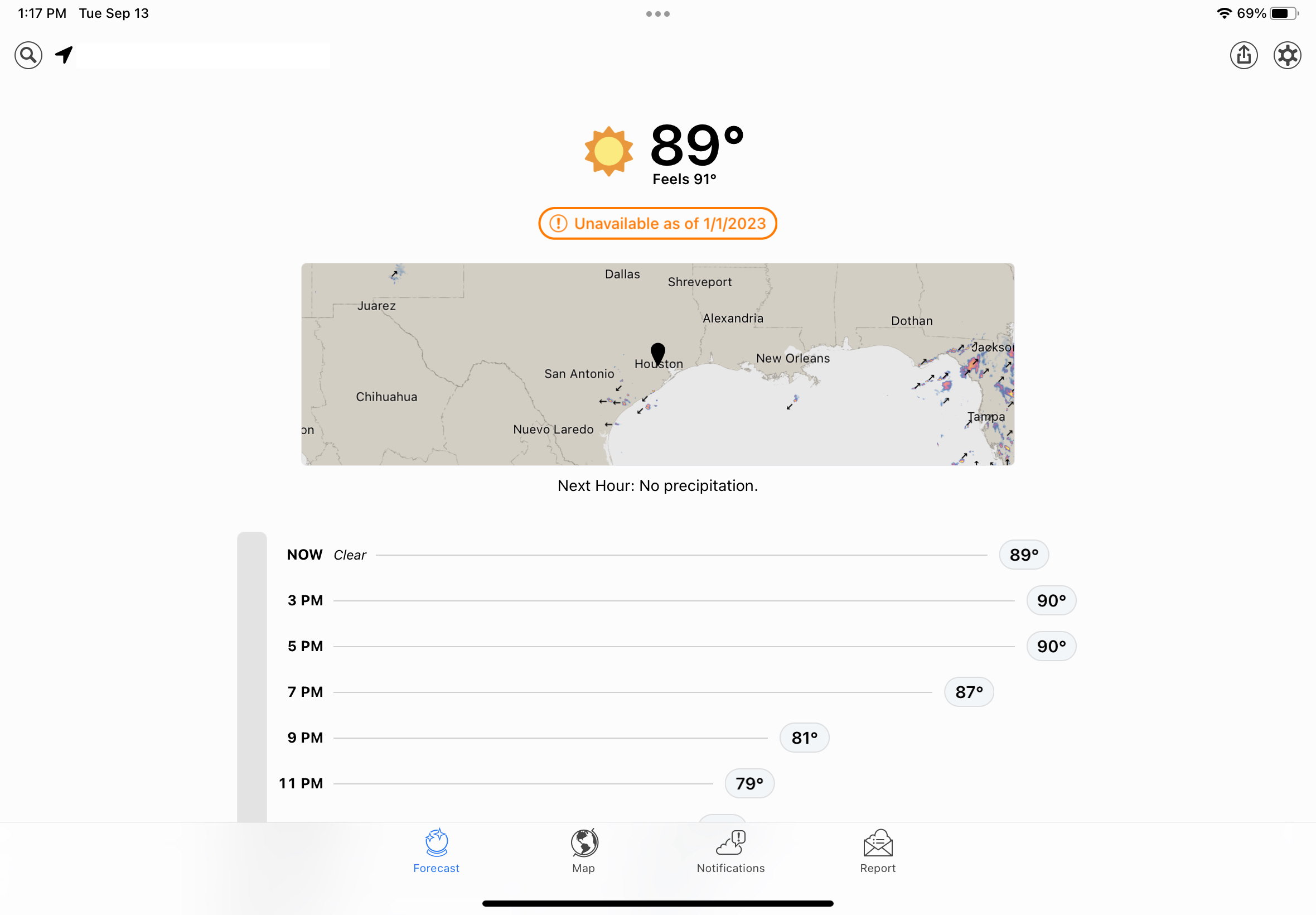 If you’re an iPhone user who downloaded and installed iOS 16 after its release on Monday, take some time from learning to configure those nifty customizable lock screens and tap on the included Weather app. On the surface, it looks a lot like the updated version introduced in iOS 15 – but below the surface is where the action is.

Tap any one of the cards on the main display – hourly or 10 day forecasts, humidity, air quality, UV index, wind, precipitaton and more – and you’ll get a screen with lots more information. Suddenly, the iOS Weather app is one of the best out there for climate data junkies.

But in order for iOS Weather to get this new life, something had to die. That’s Dark Sky, the hyperlocal weather app that Apple purchased in 2020. It will be shut down on Jan. 1, 2023.

The Dark Sky Company launched the app on iOS in 2012, then added an Android app. When Apple acquired Dark Sky, the Android version was killed shortly thereafter, and paid users of that platform were given full refunds. There is no indication recent buyers of the $3.99 iOS app will get their money back.

At least one user, who replied to a Tweet about Dark Sky’s impending demise, expressed annoyance because she had paid for it twice, including a few months ago.

Dark Sky also built an API for its weather data, and charged other developers to tap into it. That API is also going away, along with the excellent Dark Sky website, shutting down on March 31, 2023. The API is being replaced by WeatherKit, an Apple weather service which will cost less than Dark Sky’s did, and offer developers 500,000 API calls per month before charging.

While the iOS Weather app is beautiful, and the depth of data very impressive, I’ll still miss Dark Sky app and the web page. The app’s interface was nowhere near as gorgeous as Apple’s, but it was simpler and I think clearer in some instances.

It’s hard to believe that Dark Sky has been around for a decade. I first discovered it in late 2013, when a friend using it told me it was about to rain, and a few minutes later the sky opened up in a downpour. I happily forked over my $3.99 and have been a fan ever since.

One of the features that Apple has finally brought over from the original app is the one that originally sold me: weather alerts for your current location. I’m hoping over time I’ll come to love the iOS Weather app as much as I do the original Dark Sky. A few predicted downpours oughta do it.

When my 2012 Mac mini fell off the compatibility list for Apple’s latest macOS update in 2020, I was confronted with a choice. I typically replace my Macs when they won’t get new updates, so it became time to say goodbye to this desktop workhorse. But at the same time, Apple announced at its Worldwide Developers Conference that year that the company would be moving to Macs built around its own processors, dubbed Apple Silicon.

While Intel-based Macs would continue to be sold, they were clearly the past, and Apple’s own chips were its future. The transition would take two years, and there was no guarantee which models would appear when. Still, I needed to make a decision now.

I wound up buying a 27-inch Intel iMac. Despite its transition away from Intel, Apple introduced an upgraded version of this design, which had been around forever. As I wrote in a review shortly after my purchase, it’s an incredibly powerful machine. I was happy . . . and still am.

The introduction of the lower-end, smaller, 24-inch iMac with Apple’s own M1 processor last year showed the potential of this new platform. And it made me think . . . will I have buyer’s remorse once a larger-screen version of this iMac inevitably appears?

With the publishing today of Bloomberg Apple-beat reporter Mark Gurman’s latest Power On newsletter, I know the answer: No.

At least, not for a while.

Gurman, who’s got a good track record when it comes to Apple intelligence, lays out the company’s roadmap for updated Macs:

If he’s correct – and with leaks, that’s always a big IF – then the next iMac with a larger screen is likely to be branded as an iMac Pro. The previous iMac Pro, which was discontinued last year, was incredibly powerful and incredibly expensive. In the subscriber-only version of his newsletter, Gurman also predicts that a lower-end, big-screen iMac is likely not coming soon.

That means the 27-inch iMac I purchased in 2020 is going to end as an even better buy. And I say that relatively, because this computer is not cheap. It starts at $1,800; the model I purchased was $2,400, not including Apple Care and taxes. I bet slapping the “Pro” label on the next version will add at least $1,000 to the price.

Of course, all this remains speculative. It’s only rumor and vapor until it’s real. But for now, I remain comfortable with the choice I made.

The second of my resumed Houston Chronicle columns was posted today, and it’s a look at the Apple’s redesigned MacBook Pro line of notebooks. Sure, the beefed up versions of the already muscular M1 processor – the M1 Pro and M1 Max (what, no Pro Max??) – are the stars of the show, but for me the rollback of the minimalist 2016 MacBook Pro design is just as important.

As I wrote, Apple restored key ports that it stripped out five years ago, including the HDMI port, memory card slot and MagSafe, the magnetic charging connection. In the column, veteran tech analyst Tim Bajarin recounts a meeting with Steve Jobs in the late 1990s that pertains to Apple’s decision in 2021.

I love the redesign – and promptly ordered a new one to replace my 2014 MacBook Pro – but there’s something that’s been removed that makes me just a tad sad. Gone is the thin touchscreen that had replaced physical function keys at the top of the keyboard. The Touch Bar changed depending on what app was being used. It was a pretty divisive feature, and I suspect most MacBook Pro users either hated it or never used it.

While the MBP I own didn’t have it, I found it really useful when I reviewed or worked with newer models. I particularly liked the way the Photos app worked with it, how easy it made adjusting screen brightness and volume levels.

I was hoping that the Touch Bar would still be offered as an option, but no. Apple has replaced it with full-height function keys, with should make keyboard purists very happy. But I had been hoping my next MacBook Pro would have a Touch Bar, and now those dreams are dashed.

Oh well, at least I’ll have a notch at the top of my screen. There’s always that.